Dubai, UAE – September 8, 2016 – Dubai Airports’ CEO Paul Griffiths was named the Business Leader of the Year at the fifth edition of Gulf Business Awards 2016, which hosted some of the UAE’s key business leaders in Dubai on Tuesday evening.

Griffiths was also named the Business Leader of the Year for the aviation sector, which he has been an important part of since joining Dubai Airports as CEO in 2007. He played an instrumental role in the flawless opening of Terminal 3 and Concourse B in 2008, Dubai World Central (DWC) in 2010 and more recently oversaw the US$7.8 billion Strategic Plan 2020 expansion project, which concluded with the seamless opening of Concourse D in February this year. He also leads the ongoing operation and development of DWC, which is currently undergoing an expansion to 26 million passengers capacity by 2018 and will eventually be the world's biggest and best airport with an annual capacity to handle up to 240 million passengers and 16 million tonnes of cargo.

The ceremony specially acknowledged Griffiths’ leadership in the wake of a major incident at Dubai International recently when he led efforts to recover operations, while ensuring the comfort and safety of customers at the airport. In his acceptance speech, Griffiths paid homage to Dubai Airports’ team of fire fighters whose speedy response, selfless dedication and bravery saved lives that day.

A total of 25 awards – selected by an independent judging panel and public voting – were given away during the evening, which also celebrated the 20th anniversary of Gulf Business magazine. The awards seeks to applaud excellence in the corporate world and recognise companies and business leaders across nine industries including aviation and transport, banking, healthcare, energy, technology, real estate, retail, media and marketing, and tourism and hospitality. 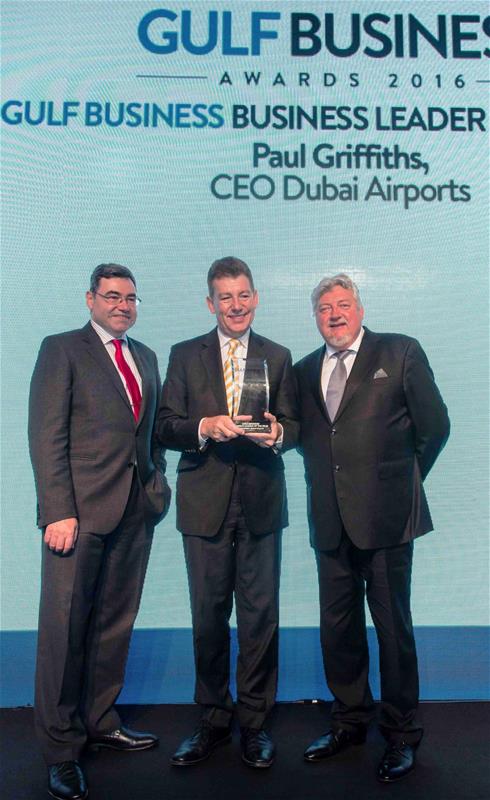