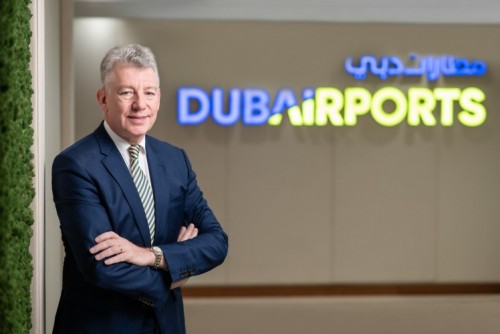 Paul Griffiths is CEO of Dubai Airports, with the responsibility for the operation and development of Dubai International (DXB) – the world’s busiest airport for international passengers, as well as Dubai World Central (DWC).

Paul joined Dubai Airports as its first CEO in October 2007. A year later, on 14 October, Paul was instrumental in the flawless launch of Terminal 3 at DXB and on 27 June 2010 successfully opened the Emirate’s second airport, DWC. He achieved another milestone in Dubai’s aviation history on 2 January 2013 with the opening of Concourse A, the world’s first purpose-built A380 facility and again with Concourse D on February 24, 2016. Paul also oversaw the opening of the passenger terminal at DWC on 27 October 2013. On December 20, 2018, Paul joined Dubai Airports’ Chairman HH Sheikh Ahmed bin Saeed Al Maktoum in welcoming DXB’s billionth passenger.

Under Paul’s leadership, Dubai Airports successfully managed the Covid-19 crisis – acknowledged by the world’s aviation and airline industry as a challenge unprecedented in history, and DXB became one of the first airports to welcome back international tourists. He led the teams at DXB and DWC to support a massive repatriation operation in close coordination with diplomatic missions, UAE authorities, airlines, and other service partners to help nearly half a million people get back to their homes during the first global lockdown in 2020. Paul played a crucial role in the recovery of DXB’s operations and growth through travel corridor arrangements with several key markets as well as by lobbying the industry to push for standardised testing-based travel protocols. Paul spearheaded a campaign to keep the hibernating parts of the airport ready for reopening at very short notice which resulted in the timely and smooth reopening of Terminal 1 and Concourse D in June 2021 and the airport's return to 100 per cent operational capacity with the reopening of Concourse A in November 2021.

Prior to moving to Dubai, Paul was Managing Director of London’s Gatwick Airport. Before joining airport operator BAA in 2004, he spent 14 years with the Virgin Group, working closely with Sir Richard Branson as a Board Director of the Virgin Travel Group, responsible for the commercial activities of both Virgin Atlantic Airways and Virgin Trains.